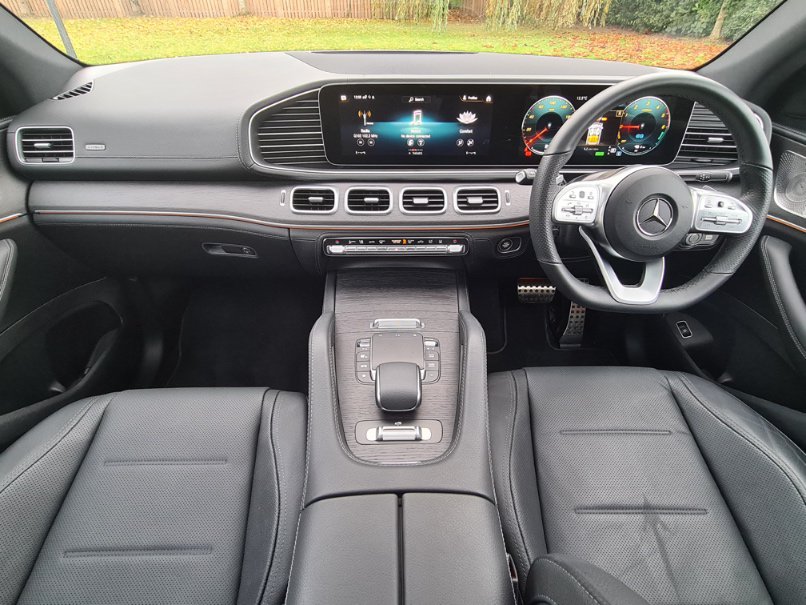 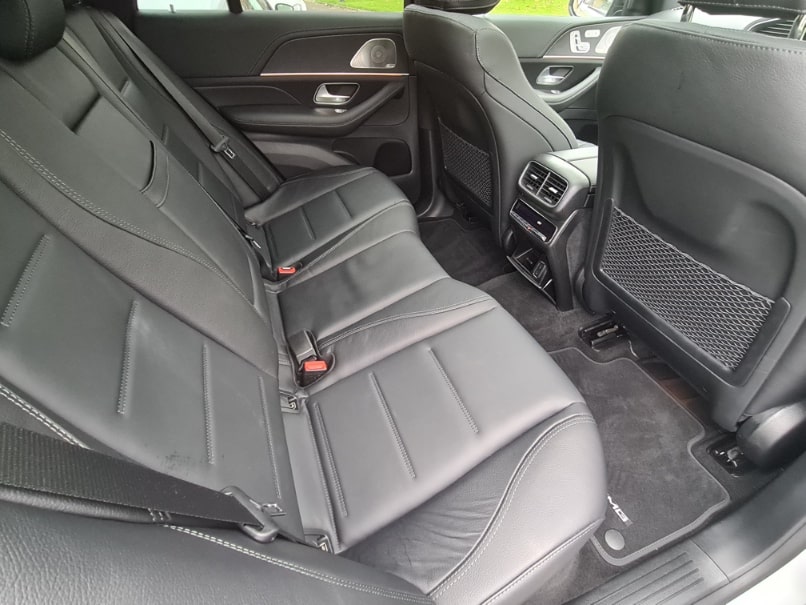 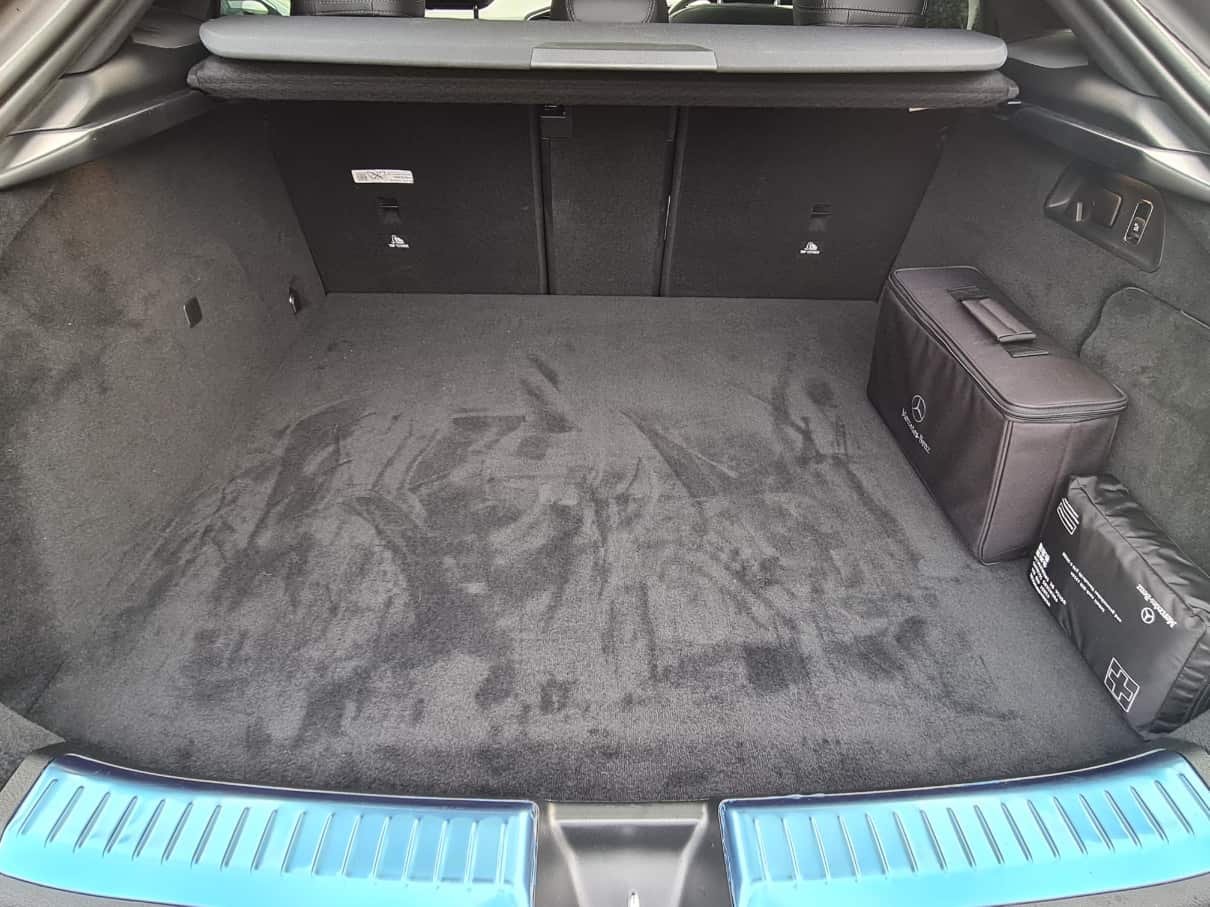 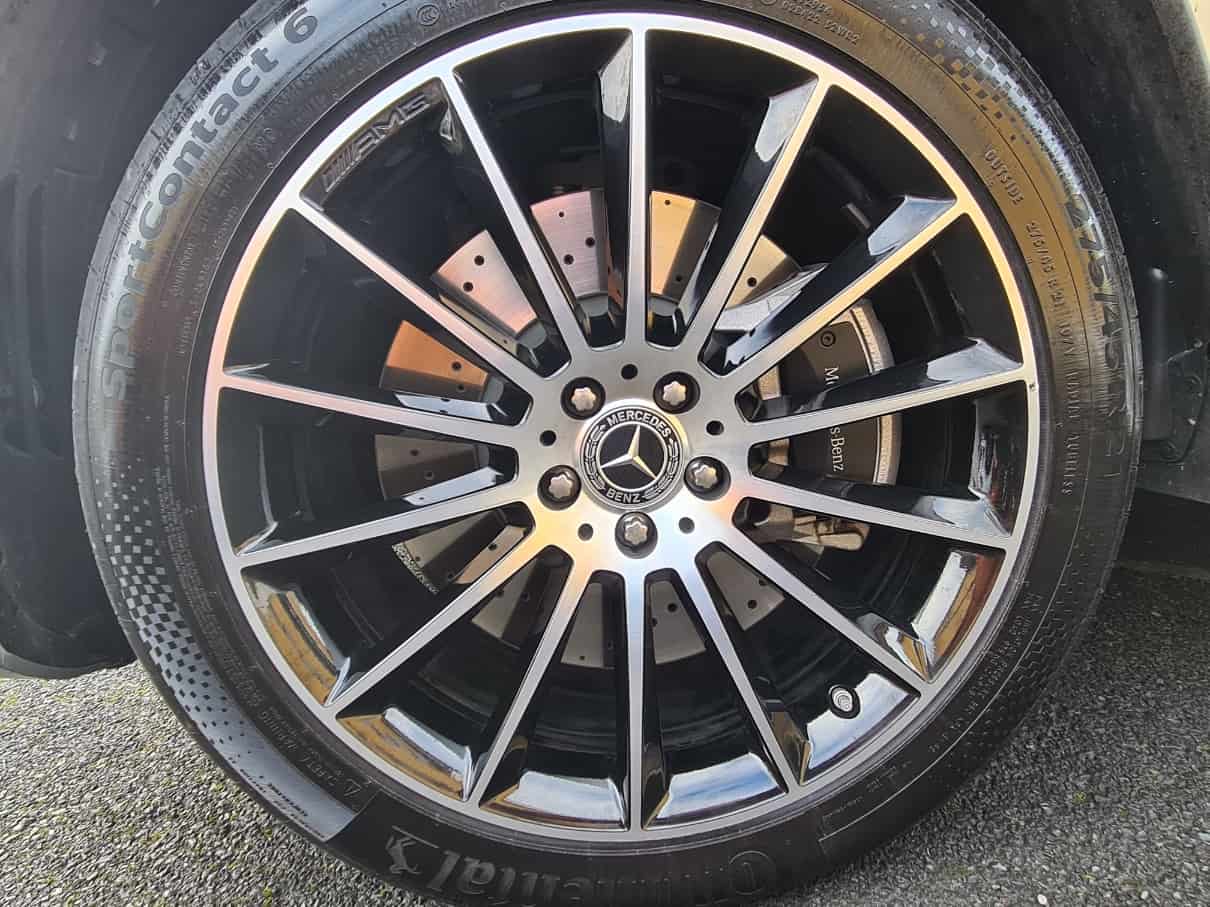 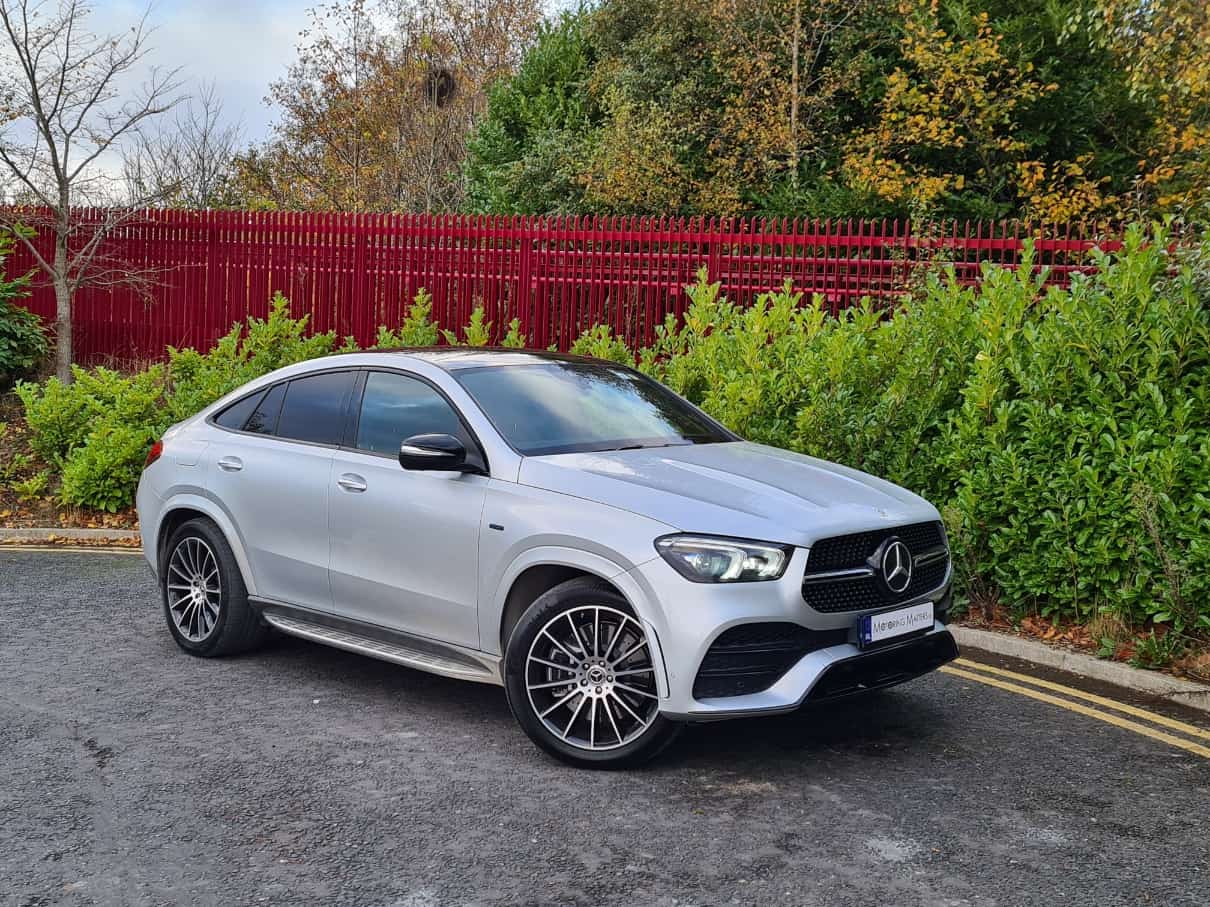 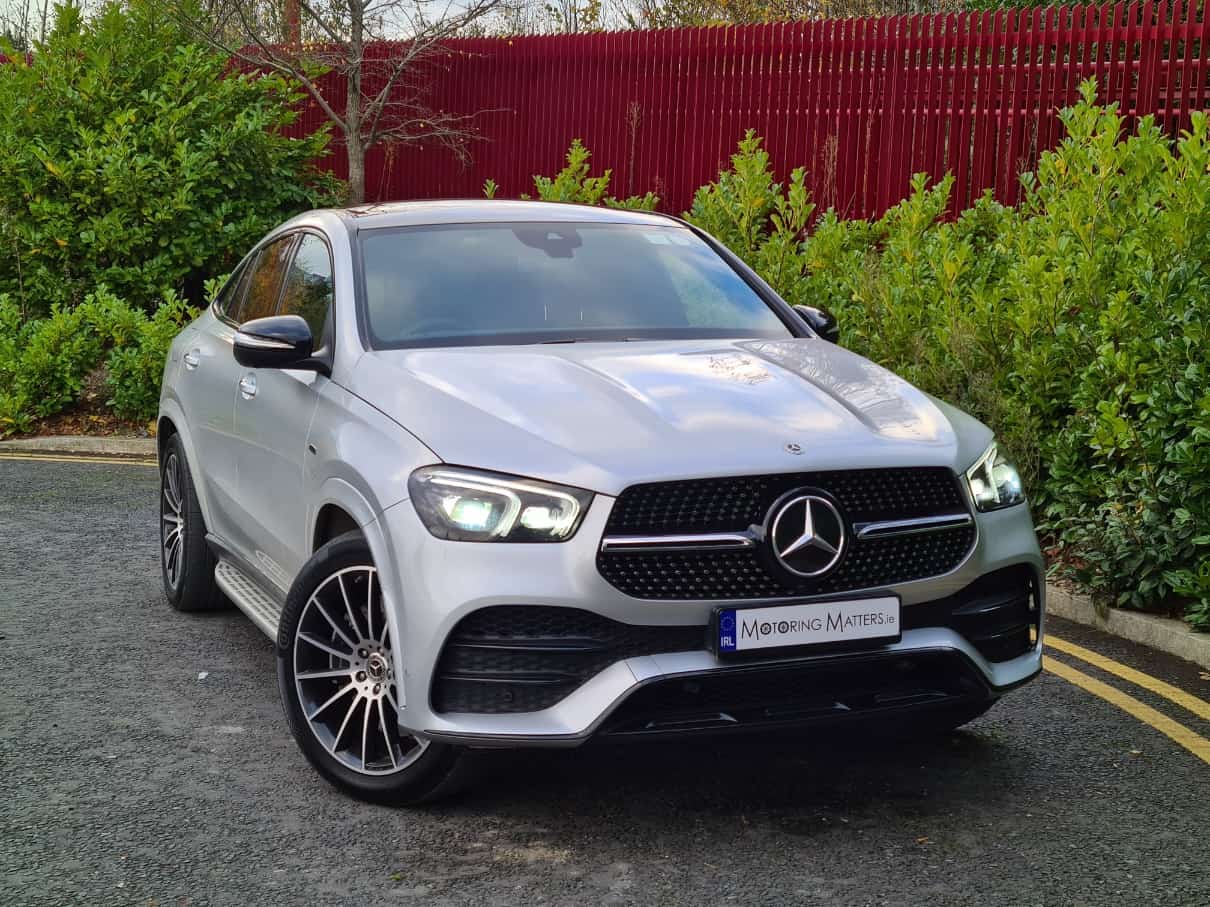 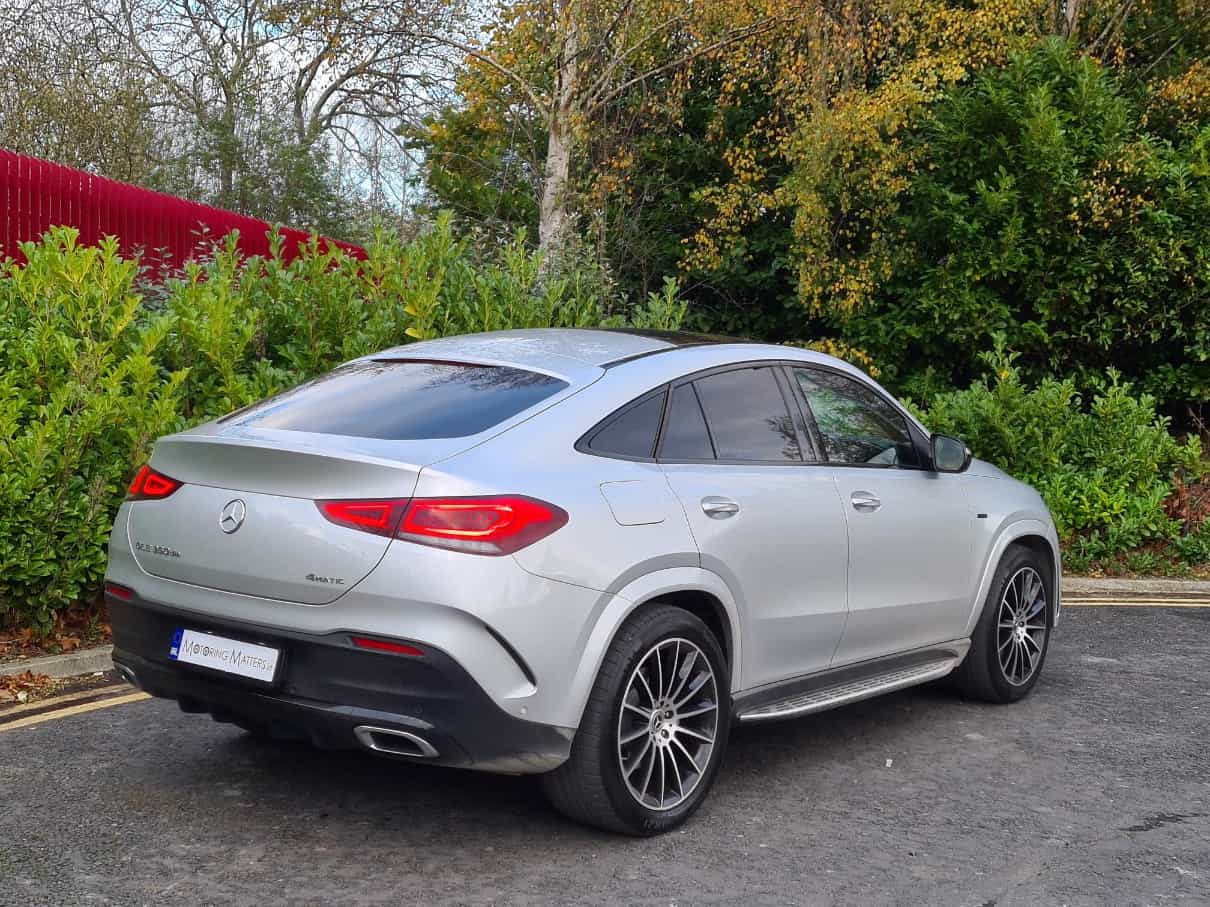 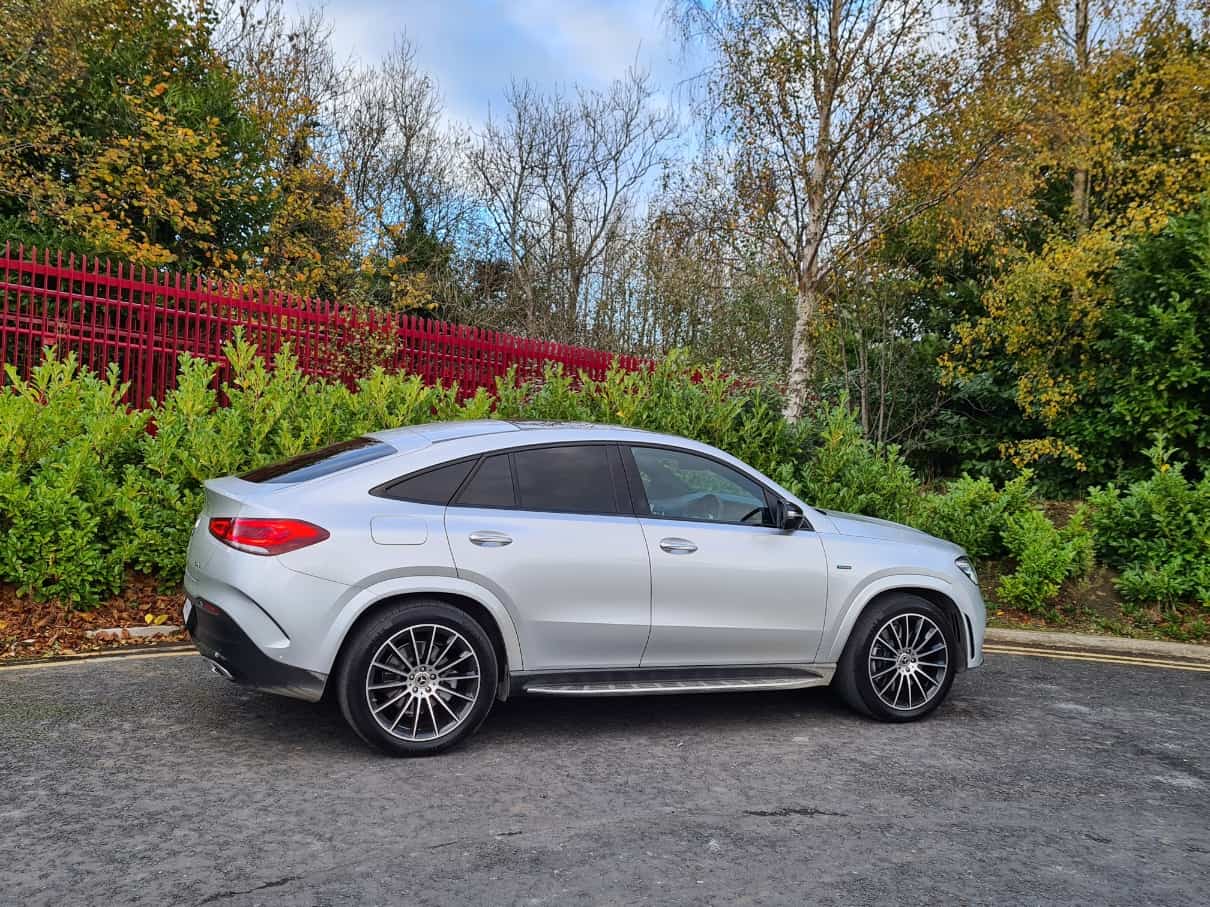 While the GLE is also available in a traditional SUV body style, it is the Coupé that I am testing here. Rivals to the GLE Coupé include the Audi Q8, BMW X6 and Porsche Cayenne Coupé, with all of the above comfortably fitting into the ‘luxurious large SUV’ market segment, albeit a relatively small market in Ireland. The front of the GLE Coupé is similar to the standard GLE with its distinct grille with horizontal slats, and a large Mercedes-Benz badge taking centre stage, but the Coupé’s thinner headlights, swooping roofline, and wider stance set it apart. Measuring in at 4,939mm in length, 2,010mm in width (excluding door mirrors) and standing 1,730mm tall, the GLE Coupé commands terrific road presence.

Powering the GLE 350 de 4MATIC Coupé is a 2.0-litre 4-cylinder turbo-diesel engine which works in unison with an electric motor for a maximum system output of 320bhp and 700Nm of torque. This power is transferred to the road by way of a 9G TRONIC automatic transmission with steering column-mounted gear selector and DIRECT SELECT steering wheel gearshift paddles, while 4MATIC permanent four-wheel-drive provides extra grip when needed. Capable of completing a 0-100km/h sprint in just 6.9-seconds, the GLE Coupé can reach a top speed of 210km/h (where permitted), while returning fuel consumption as low as 7.5l/100km on a combined driving cycle.

The infotainment system in the GLE Coupé is visually stunning and is easy to navigate through via touch, voice or by using a touchpad and menu shortcut buttons on the centre console between the front seats. Smartphone integration is seamless and Apple CarPlay and Android Auto come as standard. The GLE Coupé comes with electric front seats and the steering wheel adjusts for height and reach, so finding a comfortable driving position is a simple exercise. There is ample head and legroom in the front of the GLE Coupé, with rear seat passengers also enjoying excellent legroom, while Isofix child seat anchorage points are standard on the outside rear seats.

The luxuriously-appointed cabin of the Mercedes-Benz GLE Coupé is dominated by two 12-inch screens mounted side-by-side, seamlessly joining the central infotainment display on the left and the digital driver’s display on the right, with the latest incarnation of the Mercedes-Benz MBUX infotainment system fitted as standard. The colourful, crisp and bright screens are easy to read – even in direct sunlight – and the menus respond quickly to commands made of them. Class-leading cargo capacity of 655-litres with all rear seatbacks in place provides ample room for a set of golf clubs, two large suitcases and a child’s buggy side-by-side. The square shaped boot comes with hooks and nets to make smaller items secure on the move, while no loading lip makes it easy to load bulky items too.

My test car was a Mercedes-Benz GLE 350 de 4MATIC Coupé AMG Line, which was finished in Indium Silver metallic paintwork, with contrasting 21-inch AMG multi-spoke light-alloy wheels (painted in black with a high-sheen finish) and black Nappa Leather upholstery. As we have come to expect from the Mercedes-Benz brand, a hugely-impressive specification comes as standard. Key features include AIRMATIC air-suspension, Burmester™ surround sound system, climatised front seats (heated and cooled), panoramic sliding roof, parking package with 360-degree camera, MULTIBEAM LED headlights, electric tailgate, and a charging cable for wallbox and public charging stations (5m straight), along with a suite of advanced driver assistance systems. Optional extras fitted to my test car included aluminium, illuminated running boards with rubber studs, and a Night Package to compliment the exterior styling of the car. The relatively tall stance of the GLE Coupé provides all occupants with terrific visibility, while the wide footprint enables the car to feel sharp and upright through corners. The steering is light at low speeds and a host of sensors and cameras scan the road ahead for potential dangers and alert the driver accordingly, while the standard air-suspension does a great job of absorbing road imperfections and speed ramps. The impressive power on offer from the hybrid powerplant ensures that getting up to motorway speed can be done in a calm and relaxed manner, with the car remaining extremely well planted, quiet and immensely comfortable at all times.

With its magnificent blend of comfort, great infotainment tech, supreme diesel-electric hybrid power, and one of the finest interiors in its class, the mighty Mercedes-Benz GLE 350 de 4MATIC is yet another worthy addition to the German premium brand’s growing hybrid model line-up. My test car specification is priced at €98,065 with optional extras fitted to the car bringing the overall price to €101,295 (ex-works). 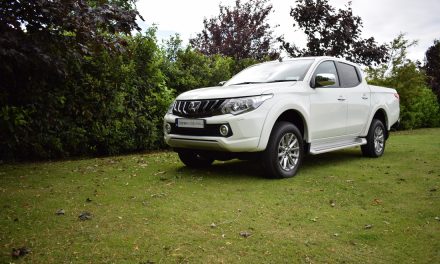 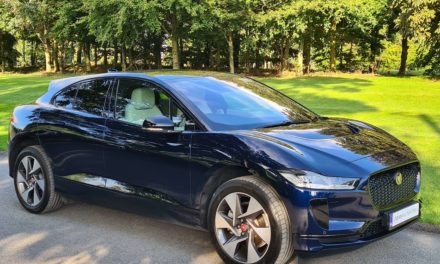 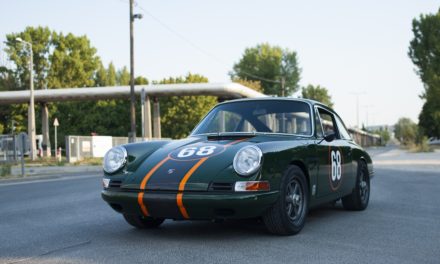 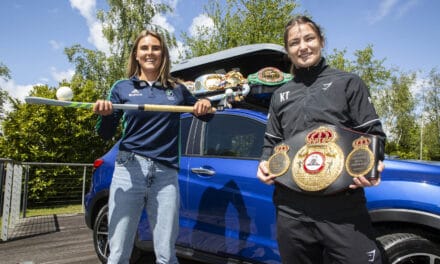